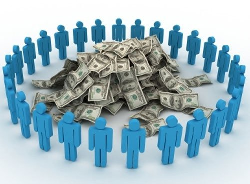 So what exactly is equity crowdfunding? Well, if you are familiar with Kickstarter or similar websites, you have probably heard of donation crowdfunding: you send money to a project or company, and in return receive some trinket, such as a T-shirt. The JOBS Act specifies a new type of crowdfunding (at least, new in the U.S.) in which investors of any stripe can buy private, unregistered shares in a startup company through an Internet portal that has registered with the Securities and Exchange Commission. There are income-based caps on how much any one investor may investor in equity crowdfunding. The funded company can accept only $1 million a year through this mechanism.

A side-effect of the JOBS Act is to allow hedge funds and private companies to market all private placement offerings (not just crowdfunding) to the general public for the first time. Even though they may market private placements to everyone, they can only sell to accredit investors. The JOBS Act dropped prohibitions for marketing private placements on the Internet, in newspapers, or any other public venue. The industry expects billions in new funding as the JOBS Act takes effect. Final rulemaking should be completed by the end of 2012 unless the SEC requests a delay.

Some concern has been expressed that equity crowdfunding may lead to Internet fraud. However, it should be stated that both Australia and the U.K. have allowed equity crowdfunding for years (eight and two, respectively) without one case of proven fraud. In the U.S., the combination of registered portals and Internet-based transparency should help alert investors to suspicious investments. If you would like to follow this exciting scene more closely, subscribe to our sister website, Crowdfunding Blogs.com.